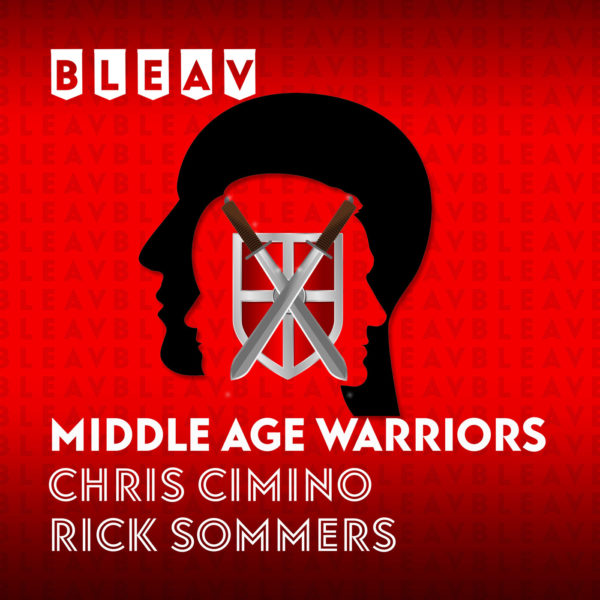 Listen in as hosts and middle-age men Chris Cimino and Rick Sommers give stories and insight into what it means to live in your 50's!

In this episode of Bleav in Middle Age Warriors, Chris & Rick interview a special guest to discuss the challenges...

In the latest episode of Bleav in Middle Age Warriors we have a very special guest, Anne Marie Duchene, an...

Corona & Isolation: It’s Not All Negative

The Corona virus is unfortunately the topic of discussion once again with Rick & Chris on this edition of The...

The Middle Age Warriors share some personal perspective on living in these Corona times. How do we cope? What have...

Chris Cimino is a veteran of both radio and television for more than 35 years. He has been heard broadcasting the weather to more than 200 radio stations in the US and Canada.\n\nIn 1992, Chris transitioned from radio into television. He had stints at WROC in Rochester, NY, WNEP, Scranton, PA, WLWT, Cincinnati, OH, WTXF, Philadelphia, PA and finally his last stop for 24 years, WNBC, New York.\n\nWhile at WNBC Chris was often on The Today Show filling in for Al Roker and he spent nearly two years as their Saturday morning meteorologist. Chris often branched out and did more than weather, interviewing various celebrities from all walks of life. His favorite interview was one he had with Elton John at a ribbon cutting for a new Tower Records.\n\nChris is a graduate of The City College of New York with a B.S. in Meteorology. He also holds a computer programming certification from CDI. Chris is a widower with two adult children and resides in NY/NJ area.\n\n

\n\nRick Sommers is a New York lifer, having grown up in the Manhattan suburb of Dobbs Ferry, NY. After graduating from Ithaca (NY) College, Rick embarked on a radio/tv career at WBLI-FM Long Island.† After† 9 years hosting am & pm drive shifts at the top 40 hit station, it was 60 miles west thru the Queens Midtown tunnel for 13+ years at New York’s highly rated LITE FM, Country 103.5 WYNY, and finally WNEW-FM Mix 102.7.\n\nGraduating from the NYU School of Social Work in† 2006. Rick was at Mt. Sinai hospital and various elder-care facilities and spent a lot of time working with the Nat’l Multiple Sclerosis Society. In 2009 he† was recruited as Broadcast Membership Liaison for the American Federation of Television and Radio Artists (AFTRA) which later merged with the Screen Actors Guild to become SAG-AFTRA a few years ago.\n\nHe has run a marathon, flown at mach 1, held the Stanley Cup and been a public address announcer at Madison Sq. Garden and Shea Stadium, the former home of the NY Mets,. He approaches middle age with optimism and joy for all the great things he has experienced in his 50+ years