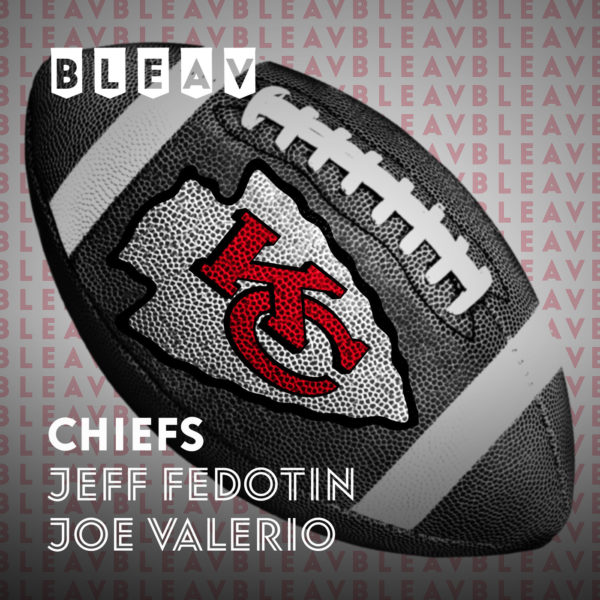 Once a second-round pick of the Kansas City Chiefs in 1991, Joe Valerio hops on the mic to provide insider insight for Chiefs Kingdom. The former Chiefs center spent four years in Kansas City, even snapping to NFL legend Joe Montana. Valerio is joined by Chiefs reporter Jeff Fedoitin to provide you with expert analysis on Patrick Mahomes II, Tyreek Hill, Travis Kelce, and the rest of the team.

Before covering the Kansas City Chiefs for†Forbes.com, Jeff Fedotin wrote for Packers.com, Pro Football Weekly, ESPN The Magazine, The Lawrence (Kan.) Journal-World and Rivals.com. After graduating from Northwestern University, Jeff interned for the Buffalo Bills, where his duties included bed checks during training camp. During his football playing days at Pembroke Hill (Mo.) School, he was known for his bad knees and even worse blocking.

Joe Valerio was selected in the second round (50th overall) of the 1991 NFL draft by the Kansas City Chiefs. In ’93 behind HOF and 4-Time Superbowl champion quarterback Joe Montana, the Chiefs went 11-5, earning first in the AFC West division. One of the more athletic offensive lineman in NFL history, Joe recorded 4 receptions for 7 yards and 4 touchdowns. A former All-American at the University of Pennsylvania, in 2005 Joe was inducted into the University of Pennsylvania Athletics Hall of Fame. Valerio retired after the 1996 season and began working in the insurance industry. He served as the Managing Director for Wells Fargo Insurance Services in Philadelphia, then in 2011, he began to work at TD Insurance/USI Insurance Services, as the Senior Vice President of Regional Sales Manager for the Mid-Atlantic Region. In June 2013, he joined Lyons Companies as the Vice President of Business Development. Follow Joe on Twitter @joevalerio73