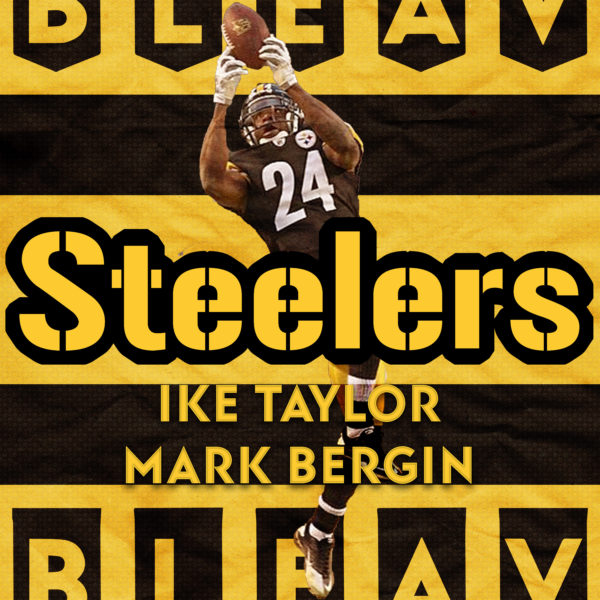 Former Steelers defensive back Ike Taylor spent 12 seasons in Pittsburgh while winning two Super Bowls with the franchise. Taylor was the epitome of consistency with the Steelers, playing in all 16 games for six of his seasons. Now Taylor is a highly reputable media analyst, joined by reporter Mark Bergin. Tune in as Bergin and Taylor highlight everything you need to know about Kenny Pickett, Najee Harris, T.J. Watt, and the whole Steelers squad.

“Bleav in Steelers” hosts Ike Taylor and Mark Bergin share their thoughts after the Pittsburgh Steelers’ loss on Thursday Night...

Hosts Ike Taylor and Mark Bergin preview the Thursday Night Football game between the Pittsburgh Steelers and Cleveland Browns. The...

Hosts Ike Taylor and Mark Bergin share their thoughts about the Pittsburgh Steelers’ 17-14 home loss against the New England...

Hosts Ike Taylor and Mark Bergin share their thoughts on the Pittsburgh Steelers’ defense after an upset win in Week...

NFL Legend & two-time Super Bowl Champion, Ike Taylor played 12 years in the NFL for the Pittsburgh Steelers. One of the most dynamic and consistent defensive players in the NFL history he is also an incredible father, role model, and a media favorite. Ike’s charismatic smile and undeniable charm have won him the affection of former teammates, fans, coaches, media, and audiences around the world leading him to grace the pages of Sports Illustrated, Pittsburgh Magazine, Parenting, Bleu Magazine, ESPN The Magazine, and Sporting News Magazine to name a few. After a successful college career at the University of Louisiana at Lafayette, Ike’s work ethic and unrelenting spirit got him to the NFL when he was drafted by the Steelers in the 2003 draft. Aside from his enthusiasm for all things media and football, Ike is passionate about giving back to the community, especially when it comes to helping youth. Ike is aware of the positive impact he is capable of having and is adamant about doing everything he can to provide guidance, direction, and opportunities to children in the community.

Mark Bergin is a freelance journalist, writer, and host of the Bleav in Steelers podcast along with Ike Taylor. Mark worked for two-plus years as a digital producer at WTSP in St. Petersburg/Tampa, Florida, and for two years at WBIR in Knoxville, Tennessee. He’s covered the Tampa Bay Rays? stadium search, Jameis Winston’s struggles leading the Tampa Bay Buccaneers, and the Butch Jones era of Tennessee football. Mark is a native of the Chicago suburbs, and he graduated from the University of Missouri with a bachelor’s degree in broadcast journalism production.