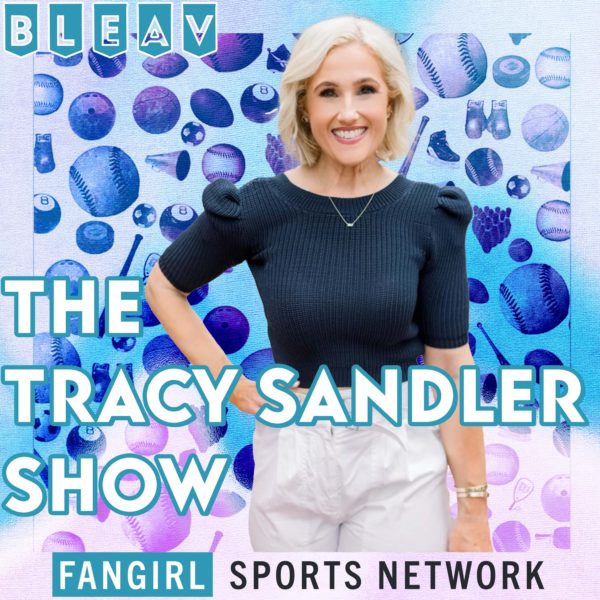 Hosted by Founder and CEO of Fangirl Sports Network, The Tracy Sandler Show is a sports and lifestyle podcast that will get you caught up on the top sports headlines, while adding in laughter and spice. Tracy is a beat reporter covering the San Francisco 49ers and a die-hard Dodgers Fangirl, so prepare to bleed blue, think gold and get ready for game-day.

Tracy Sandler is the Founder and CEO of Fangirl Sports Network (FGSN), which is a rapidly growing digital media company for female sports fans that delivers weekly news updates, commentary about professional sports teams, as well as a behind-the-scenes look at accomplished women making waves in the sports industry. Tracy began as 49ers Fangirl in 2015, bringing fans the latest news and behind-the-scenes action for her beloved San Francisco team. This led to her becoming a beat writer and member of the 49ers’ press corps, where she reports live from the field and the locker room, attends press conferences, and covers community outreach events. In addition, Tracy hosts a special “Five Fun Facts” series with 49ers players that is exclusive to FGSN.

In fall 2019, Tracy launched her newest weekly podcast, “Get My Job,” where she interviews women who have made a significant impact in the sports industry. Some of her guests include Amy Trask, Dianna Russini, Rachel Lindsay, MJ Acosta and Judy Battista, amongst many others.

Tracy has been featured in numerous publications including SUCCESS Magazine, The Everygirl, Inspired By This, SWAAY, and The LA Girl, and has appeared on various broadcasts such as “Home & Family,” “Cheddar” and “Business Rockstars.” She also appears regularly on KTVU as a 49ers expert.

Tracy was a sportswriter during her collegiate years at The University of Michigan, and reignited that passion when she launched her blog, The Trials and Tribulations of My Love/Hate Relationship with the San Francisco 49ers, during the 2014 NFL season. After receiving an abundance of enthusiasm and positive feedback, Tracy decided to turn her passion into her career.