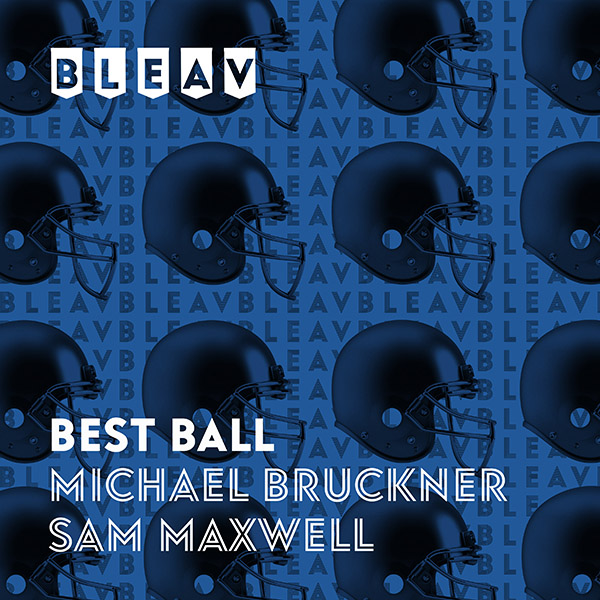 Bleav in Best Ball with Michael Bruckner and Sam Maxwell

Best Ball is exploding in popularity! Listen in as Michael and Sam give you one special episode with everything you need to dominate 2019.

In Episode 2 of Bleav in Best Ball, Sam Maxwell and Michael Bruckner discuss the NFL draft and their favorite rookie running backs to target given their recent landing spots. Sam goes out on a limb and plants his flag on Indianapolis Colts rookie Jonathan Taylor, declaring that he will be a top three pick in … Continued

What the heck is best ball?  Why is fantasy football even better in the offseason?  Where do you play and what are some of the differences from your standard redraft home leagues?  Host Sam Maxwell is joined by Michael “The Nation” Bruckner, making his Bleav Podcast Network debut as the two discuss the basics of … Continued

Michael Bruckner is an avid sports fan and diehard fantasy football player. He is here to help you win your Best Ball fantasy leagues. A graduate of the University of Oregon who attended during the Chip Kelly heyday, Michael loves his Oregon Ducks. He is a lifelong New York Giants fan, and his favorite sports moment is the David Tyree on-the-helmet catch against the then-undefefeated Patriots in Super Bowl XLII. His strong opinions, quick wits, and knowledge of the game of football have earned him the nickname of “The Nation” in fantasy football circles worldwide. In his spare time, he enjoys watching highlight tapes of incoming rookies. Be sure to follow him @thebruckreport for all of your fantasy football needs!

Sam Maxwell is a 2012 graduate from the University of Wisconsin. He is an exceedingly proud Badger and with his fanatical following, he is an expert in handicapping Badger games and the Big Ten conference at large.  After working in sports TV production with no real skin in the game, Sam felt determined to find a better way to consume sports, have fun, and make money doing it! Having competitively played fantasy sports for nearly two decades, Sam is an expert in fantasy football, fantasy basketball, and his handicapping specialties include NFL player props, college basketball, and college football. He lives in Culver City, CA with his girlfriend Anastasiya and his dog Dexter.