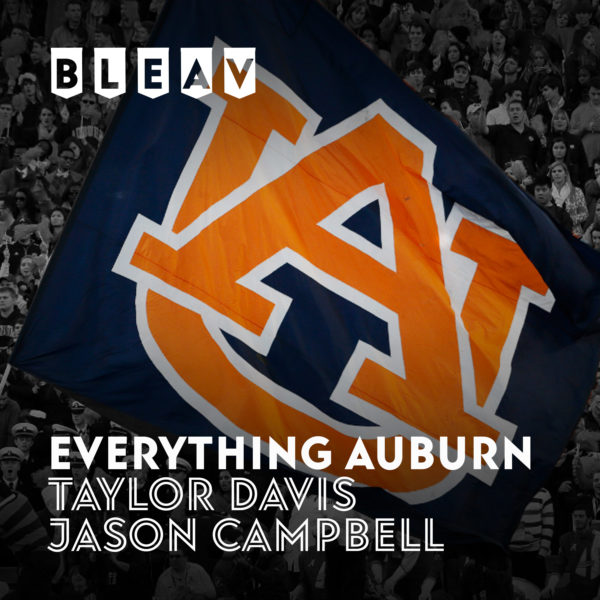 Bleav in Everything Auburn

As one of the greatest quarterbacks in Auburn football history, Jason Campbell is who you want to hear from about the Tigers. The former SEC player of the year and nine-year NFL vet provides a unique perspective while covering Auburn. Campbell is joined by ESPN reporter and Auburn graduate Taylor Davis to bring you all of the news and analysis surrounding Bo Nix, Coach Bryan Harsin, and the rest of the squad for War Eagle nation.

This week, Jason and Taylor are giving you all the updates and analysis coming out of the Tigers' fall camp,...

This week, Jason and Taylor are catching up on the latest from Big Cat weekend on the Plains, the basketball...

This week, Jason and Taylor are talking the latest news and notes around Auburn athletics before diving into an insightful...

This week, Jason and Taylor are recapping SEC Media Days, top headlines, quotes, debates and analysis. Jason reflects on his...

A veteran NFL Quarterback, college football legend, senior business leader, executive Coach, Leadership Facilitator, and Motivational Speaker: Jason Campbell is a football and business trailblazer. From 2000 – 2004, Jason dominated the SEC earning 2004 Player of the year, 2004 SEC Championship game MVP and 2005 Sugar Bowl MVP for the Tigers. He is the winningest Quarterback in Auburn history and led Auburn University to a 2004 perfect season 13-0. Jason’s accomplishments off the field have garnered him large success as well. As a mentor to the youth on team building and leadership development, he has gained high acclaim for his efforts in the community. In addition, he has hosted Golf Tournaments for 3 years in the Washington DC area for Leukemia and Lymphoma Society.†\n\nTaylor Davis is a sports reporter and host. A graduate of Auburn University with a degree in Broadcast Journalism and she has been a reporter for ESPN since 2014, covering a variety of sports for various networks and has been closely involved in the launch and production of weekly college gymnastics on ESPN platforms.††Taylor brings her production and reporting background along with strong ties to the sport, to talk all things Tiger football.